It’s difficult to eat badly in San Sebastián. Nestled between the French Pyrenees and Spanish Basque country, this epicurean city takes food very seriously. Historically, San Sebastián (or Donostia, as it’s called in the Basque tongue) was a luxurious seaside escape for the Spanish royalty. If you spend even five minutes in this idyllic city, it’s easy to see the allure of the cerulean blue water, emerald hills, palm-tree-lined promenades and Belle Époque sandstone buildings. Today, though, people from all over the world flock to this coastal town to do one thing: Eat.

This gastronomic capital is a hotbed for Michelin-starred restaurants and renowned chefs, from Elena Arzak (Arzak) to Andoni Luis Aduriz (Mugaritz). But the truth is you don’t have to spend a small fortune for a remarkable meal here. The real star of San Sebastián’s gourmet empire is the humble pintxo.

A pintxo is a type of Spanish tapa found in the Basque region. Traditionally, they are held together by wooden picks and artfully displayed atop a restaurant’s bar. Think: Paper-thin ribbons of jamón ibérico on sliced baguette, bountiful crab salad topped with fatty smoked salmon, or salty skewers of anchovies, olives and piquillo peppers. More broadly though, the word “pintxo” refers to any small plate. In addition to the classic cold pintxos, most bars have an additional menu of hot dishes like seared foie gras, padrón peppers and piri-piri grilled octopus.

But really, pintxos are more than bar snacks; they are a lifestyle in San Sebastián. There is even a basque name for a pintxos crawl — txikiteo — whereby people travel from bar to bar ordering a tapa and a beer, a sidra (hard cider) or a glass of txakoli (the local white wine). Many pintxo bars in the old town have a similar modest appearance from the outside. But inside, each has a distinct character and specialties you don’t want to miss.

You wouldn’t want to be the bartender at Borda Berri. She works alone, single-handedly fielding orders from the throngs of hungry customers and yelling them to the kitchen. She’s on her feet from noon until around midnight, when the last of the dinner crowd trickles out. Everything at Borda Berri is served hot straight from the kitchen. The decadent squid ink ravioli is the perfect way to start off before moving on to the meats. The veal cheek is cooked in red wine for six hours and the pork kebab, a single barbecue spare-rib, is so tender you won’t need a knife.

Walking into Ganbara is like walking into a food-lover’s version of Disney World. On the bar sit huge platters overflowing with padrón peppers, a dozen types of local mushrooms and giant ruby-red prawns. The velvety spider crab tartlet is a good way to whet your appetite before moving on to the wild mushrooms topped with a runny egg yolk, as perfectly shaped as a full moon. It’s one of the most delicious things you’ll eat in all of San Sebastián.

Before you can spot the crowd, which usually spills past the entryway and onto the sidewalk, the intoxicating smell of fried seafood will lead you toward Paco Bueno. Inside, framed sports memorabilia lines the walls and locals speak Basque as they sling back glasses of the local sidra. You’ll find traditional bites here like padrón peppers, bocadillos and fluffy Spanish omelettes, but the highlight is the crispy, tempura-battered prawns. They’re served straight from the oven, golden-brown and still sizzling. 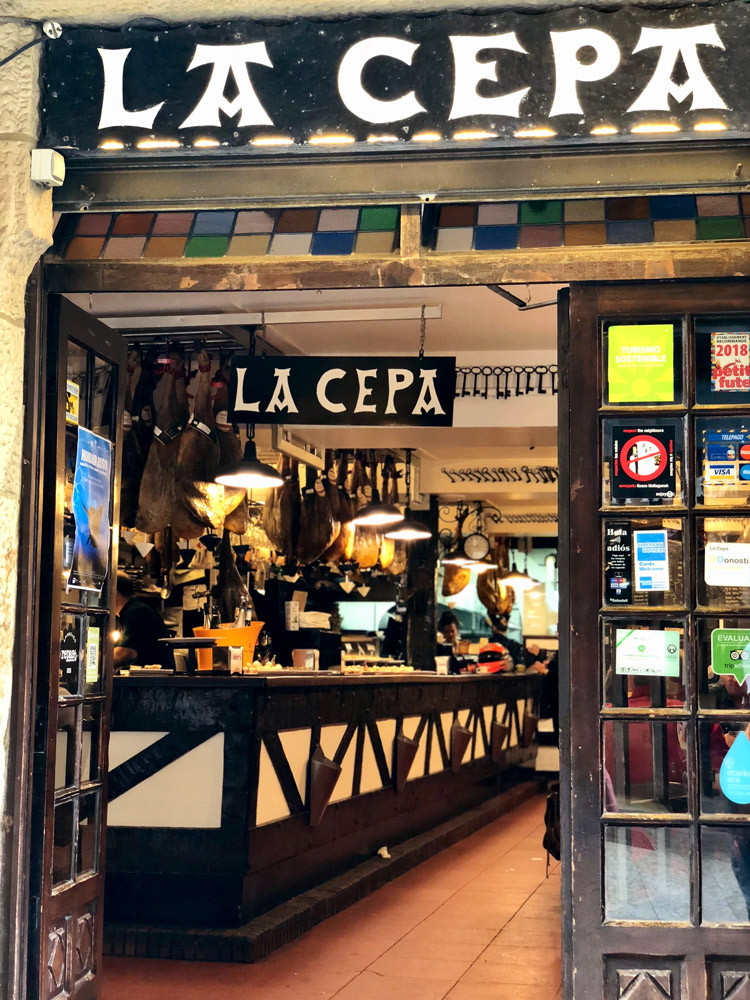 On the ceiling of La Cepa hang half a dozen legs of Iberian ham, and the half-timbered bar is lined with pieces of sliced baguette topped with fluffy Spanish omelet, anchovies with pickled vegetables, and juicy roasted red peppers in olive oil. But don’t get caught up in the cold pintxos. Order a delightfully greasy ham croquette and the clams and rice stewed in a creamy white wine and garlic sauce. If there’s one place to eat jamón ibérico, it’s here. The bartender will slice a generous plate of salty, nutty, fatty cured ham right before your eyes.

By 10 p.m., Cuchara de San Telmo is the hottest spot in town. Plates of Galician-style octopus, seared foie gras and crispy, caramelized pork belly are passed like flying saucers across the narrow and lively bar. But for those who prefer to avoid big crowds, there are also a handful of outdoor tables. Everything is made to order here, and the portions are more than generous, making it a popular spot on one’s dinner-time pintxo route.

Gandarias is a dizzying whirlwind of smells, sights and flavors. As you peer down the rectangular wooden bar, there are about 30 different pintxos on display, and each looks as delicious as the next. Don’t walk out without trying the decadent sea urchin topped with roe or the mushrooms tossed in white truffle sauce over sliced jamón ibérico. 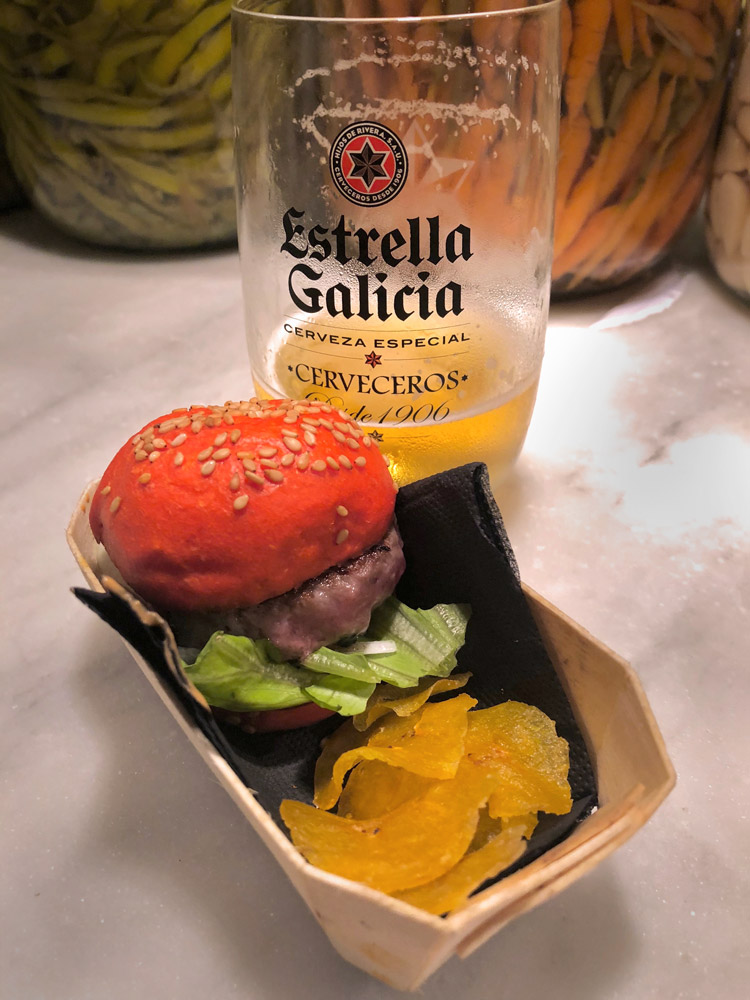 The interior of A Fuego Negro is sleek black. Neon lamps hang on the walls and hip-hop music plays through the speakers. It’s shockingly more modern than its neighboring pintxo bars, where wooden bars are topped with colorful bite-size snacks. There is no food on display, but a menu of small tapas and larger plates is written on the walls. Here, the dishes are inventive, verging on molecular, such as manzanilla olives filled with vermouth and cod mousse. On the list of small bites, the crispy hake melts in your mouth, as does the “McKobe,” a kobe beef slider served on an orange bun.

Just on the outskirts of the old town, Bar Haizea attracts a steady crowd all day long. The bartender looks like a typical Spanish grandmother. She speaks not a lick of English, but she welcomes you to the bar with a friendly smile. She patiently mixes up espresso and brandy, then lights it on fire to make a carajillo, a traditional post-dinner beverage. Here, the food is straightforward yet incredibly fresh: skewers of buttery sea scallops and shrimp; seared foie gras with baked apples; and grilled langoustine topped with seafood bisque.

The highlight at Bar Txepetxa is white anchovies, and even if you’re not a fan of this Basque specialty, they’re well worth a try here. For about €2 a pop, they are served on slices of baguette with a handful of toppings to chose from. You can’t go wrong with the incredibly rich sea urchin, creamy spider crab or the savory black olive tapenade. By Hannah Loewentheil Hideaway Report Contributor Hannah Loewentheil is a Manhattan-based writer and photographer. Her work has been featured on BuzzFeed, Food & Wine, Salon and more. Hannah lives to eat, travel, drink wine and write all about it.
.article-cta-bottom